Please join us in congratulating Dr. Ahmad Alqassas, an Associate Professor in the Department, on the publication of his new book on Arabic polarity sensitivity, now in print under Oxford UP’s flagship series’ Oxford Studies in Comparative Syntax (Link). 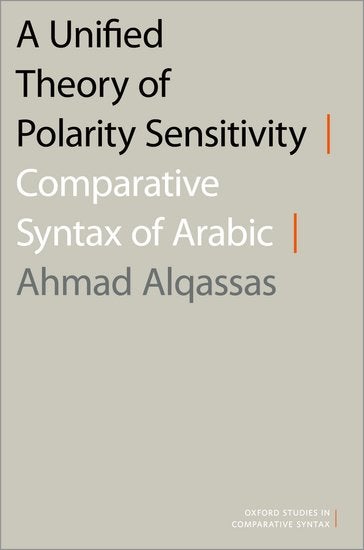 Description from Oxford University Press: “Polarity sensitivity is a ubiquitous phenomenon involving expressions such as anybody, nobody, ever, never, somebody and their counterparts in other languages. These expressions belong to different classes such as negative and positive polarity, negative concord, and negative indefinites.

In this book, Ahmad Alqassas proposes a unified approach to the study of this phenomenon that relies on examining the interaction between the various types of polarity sensitivity, with a particular focus on Arabic. Alqassas shows that treating this interaction is fundamental for scrutinizing their licensing conditions. Alqassas draws on data from Standard Arabic and the major regional dialects represented by Jordanian, Egyptian, Moroccan, and Qatari. Through the (micro)comparative approach, Alqassas explains the distributional contrasts with a minimal set of universal syntactic operations such as Merge, Move, and Agree. He also considers a fine-grained inventory of negative formal features for polarity items and their licensors. These simple features paint a complex landscape of polarity and lead to important conclusions about syntactic computation.

By engaging with the rich but under-studied landscape of Arabic polarity sensitivity, this book provides a new perspective on the syntax-semantic interface and develops a unified syntactic analysis for polarity sensitivity. These contributions have important implications for the study of Arabic and for syntactic theory more generally.”